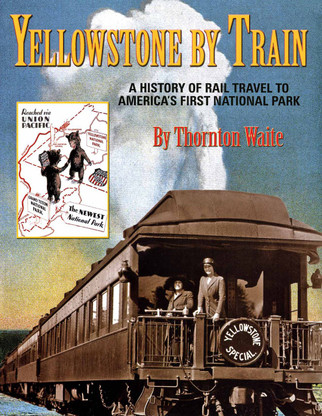 Yellowstone by Train - A History of Rail Travel to America's First National Park: Thornton Waite does a great job of presenting the history of Yellowstone Park from its establishment by Congress and the Northern Pacific in 1872 until the end of rail transportation to the Park in the 1960s. Five different railroads served the five Park entrances over the course of almost 100 years. The Northern Pacific began taking tourists to their north entrance at Gardiner with the completion of its mainline in 1883, followed by the CB&Q through their east entrance from Cody WY in 1901, the Union Pacific through the west entrance in 1907, the Chicago & North Western built a line to Lander WY with a 150-mile bus service to the Park's south entrance in 1926, the Milwaukee Road completed its line to the Gallatin Gateway and reached the West Entrance with a 100-mile bus link, and the Northern Pacific opened its second access point via Red Lodge and the spectacular, 68-mile Bear Tooth Highway in 1936. Although the Union Pacific route proved the most popular and handled close to 50% of the rail visitors, all the roads used the Park in their advertising to promote the west. The excellently researched book, features color and B&W photos. It has 168 pages in an 8" by 11" format with soft covers.