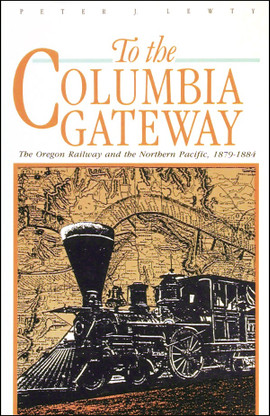 To the Columbia Gateway

TO THE COLUMBIA GATEWAY The Oregon Railway and the Northern Pacific, 1879 – 1884:

The excitement of the 19th-century frontier comes alive in this history of early-day railroading in the Pacific Northwest. Combining narrative with fascinating photographs and maps, the author successfully conveys a sense of the enormous time, money, and hard work required to build the first Pacific Northwest rail lines.

To the Columbia Gateway covers the origins of the Northern Pacific Railroad and the Oregon Railway and Navigation companies, the rise and fall of Henry Villard’s first empire, and the completion of the transcontinental tracks that converged on the Columbia Gateway in the late 19th century.

Tales of personal sacrifice and hardship, for both laborers and railroad entrepreneurs, echo through Lewty’s account of this formative era in Pacific Northwest history.

Peter Lewty received his formal education in England and has been a mining engineer living in Powassan, Ontario.