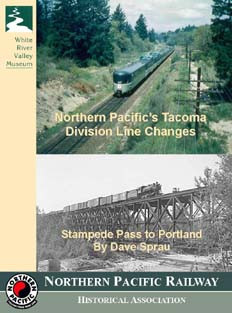 Dave starts with the NP's building of the orphaned track between Kalama and Tacoma in 1873 to comply with the specifications of its land grant. From that beginning, the NP extended track to the coal fields east of Tacoma which later became part of the Stampede Pass line. He reviews the elimination of the Weston Loop, the building of the Auburn to Palmer Junction Cutoff, how the Point Defiance line demoted the Prairie Line; the purchase of the Longview Portland and Northern, the evolution of the Kalama Ferry and the direct line to Portland via Vancouver, Washington. This program was presented at the Auburn Senior Center on November 5, 2004, and is one hour and 23 minutes long.