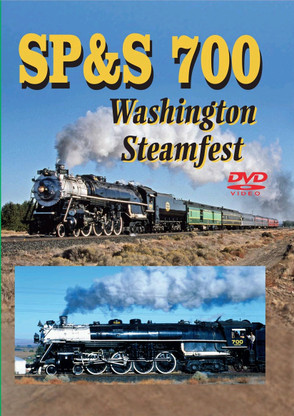 SP&S 700 at Washington Steamfest: October 1990 was the first big exposure to newly restored 4-8-4, SP&S 700 for the general public since it last operated in 1957. She was built by Baldwin to the NP Class A3 locomotive design and was part of the NP's 1937 order. This beautiful locomotive is seen operating on former home rails of the Spokane, Portland, & Seattle Railway as it travels from Portland along the Columbia River to Pasco, Washington. At the time, the Washington Central owned and operated part of the former first subdivision of the NP from Kennewick to Yakima to Cle Elum. The Washington Central hosted several trips featuring SP&S 700 and their Washington Dinner Train consist.

We enjoy two roundtrips from Kennewick to Prosser in one day. Saturday trips to Ellensburg via Yakima Canyon, and a Sunday trip to Cle Elum. In addition we see some short runs of former Great Western 2-8-0 No. 51 operated by the Yakima Valley Rail & Steam Museum which became the Northern Pacific Railway Museum in Toppenish WA. We will enjoy fall colors and cool steam effects, as well as former NP semaphore signals in some sections. After the Steamfest we follow 700 westward toward Portland. There are no diesels on the consist on these trips, and are considered some of the best action ever seen of SP&S 700. Action shot and producedby Greg Scholl Video Productions.