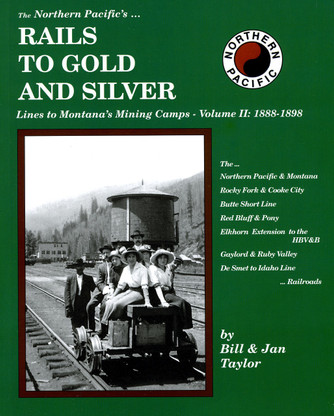 Rails To Gold and Silver - Lines to Montana's Mining Camps - Volume II: 1888-1898: In 1883 the Northern Pacific Railroad completed its main line through Montana. Its charter and the conservative nature of its management prevented the NP from building branch lines to developing gold, silver and copper mining camps such as Wallace, Cooke City, Elkhorn, Pony and Virginia City. James J. Hill of the Great Northern Railway recognized the NP's omission and began building a railroad into the territory. By 1886 the NP, aided by Helena banker Samuel T. Hauser, was in an all-out war with Hill and the UP to protect its mining traffic sources. Rails to Gold and Silver: Volume II covers the Northern Pacific & Montana's construction between 1888 and 1898 which resulted in the completion of the following six railroads: the Rocky Fork & Cooke City, the Butte Short Line, the Red Bluff & Pony, the Elkhorn Extension to the Helena, Boulder Valley & Butte, the Gaylord & Ruby Valley, and the De Smet to Idaho Line (Wallace branch). 156 pages, softcover.