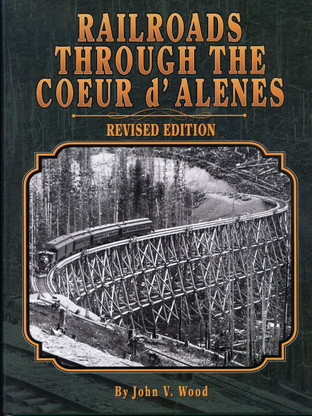 This revised edition includes the history of the last Burlington Northern train that traveled the old NP Coeur d’Alene Branch culminating in its abandonment and the end of Union Pacific Railroad service to the Coeur d’Alene Mining Area. The book features a new layout and over 400 photographs. Images are accompanied with first-hand accounts of early day residents, illustrations and maps that speak far more eloquently than any text could. Many never before published photographs include the work of well-known rail photographers Warren McGee, Phil Hastings, F. J. Haynes, Ron Nixon, Otto Perry, and Don Roberts – as well as over 100 photographs from the Barnard-Stockbridge Collection (Barnard Studio of Wallace, Idaho). Many of these new images produced from the original 8 x 10 glass plate negatives.

While the term “pictorial history” is very appropriate, it must also be stressed that the carefully researched text provides a definitive history of the railroads in the Coeur d’Alenes. This revised edition not only updates the original by adding the sad note of the last railroad, Union Pacific, leaving the area; but it also adds a wealth of photographs the author collected in the years following the first edition. Readers will delight in the bonus images, which are an improvement over those used in the original edition. Whatever the future might hold for the Coeur d’Alene mines, the glories of its past that railroads made possible are secure; and those who love to look back upon those times will delight in reading Railroads Through the Coeur d’Alenes.