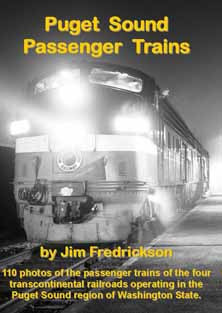 Puget Sound Passenger Trains by Jim Fredrickson: Railroad passenger service came to the southern Puget Sound region of Washington State when the Northern Pacific completed its line from Kalama, Wash., in 1873. The number of trains increased with the completion of the NP's transcontinental mainline in 1883 with trains ferried across the Columbia River. The Great Northern started their service to Seattle in 1893. After the completion of the river bridge at Vancouver, Wash., the Union Pacific in 1909 and Great Northern in 1910, gained rights to use the NP's Seattle-Portland mainline. Also in 1909, the Milwaukee Road arrived in the region. With four transcontinental railroads serving southern Puget Sound from the 1940s through the 1970s, passenger trains were a dependable means of transportation for the citizens. Fortunately, Amtrak continues to provide frequent service on the Seattle-Portland mainline.
Jim Fredrickson started his railroad career with the Northern Pacific as a call boy in 1943 while still in high school. He learned Morse Code during this first job enough to be become a relief station operator six months later. From operator, Jim became a train dispatcher at Tacoma Union Station, then night chief dispatcher, and finally a transportation assistant in Seattle dealing with car availability after the Burlington Northern merger in early 1970. Jim spent thirty-nine years working on the Tacoma Division for both railroads and retired in 1981.
Jim mastered the art of railroad photography early on. His legendary photos, like train No. 408 with engine NP2603 taken at Nisqually, Wash., while the train was passing the station at 50-miles-per-hour, is one of the icons of his collection. Jim's images have been published in many railroad-related books and magazines. He continues to make his images available to the NPRHA for publication in the Mainstreeter and in our annual calendar. This 70-minute DVD was recorded in studio conditions and contains 75 NP, 10 GN, 10 Milwaukee and 15 UP images.