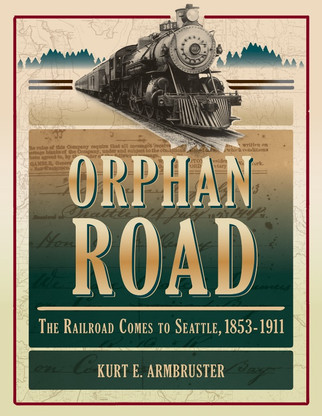 Orphan Road The Railroad Comes to Seattle, 1853-1911: Seattle was bitterly disappointed in 1873 when the Northern Pacific selected rival Tacoma as the future Puget Sound terminus for Washington Territory's first transcontinental railroad. Kurt Armbruster's enthralling account describes Seattle's frantic quest for a saltwater terminal of its own on Elliott Bay, and the machinations that developed between the city founders and the railroad companies. From early territorial times, Seattle aspired to be the "Queen City of Puget Sound" by tapping into a rich Asian Pacific commerce. A transcontinental rail link to the eastern United States was critical to this scheme. Frustratingly thwarted again and again, "Seattle Spirit" finally prevailed by 1890, but not without cost. Seattle's growing pains included "war" with the Northern Pacific and its extensive land grants, and with the railroad barons who contrived to manipulate local politics and commercial expansion. Armbruster's well illustrated account describes the growth of railways across the Puget Sound region from the initial 1853-54 government surveys to the completion of the Milwaukee Road in 1911. Included are accounts of the individual lines, the intense Seattle-Tacoma rivalry, and the colorful personalities and urban aspirations that eventually brought Seattle to the forefront of Washington commerce. Softbound volume with 280 pages.