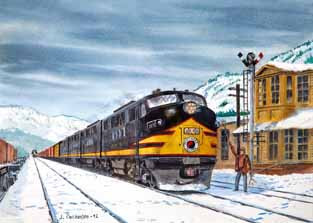 NP 6008 at Lester WA Winter Card - The NPRHA reproduced some of Jack Christensen's great watercolor paintings of NP locomotives operating in snow conditions as Holiday Season greeting cards. Each card is commercially printed in full color, comes with a 5.7" x 4.4" envelope and has the caption shown below on the back. Each package contains twelve copies of the card shown above and twelve envelopes.

The fireman of Extra 6008 East picks up orders as they arrive Lester, Washington. In the distance, a similar four-unit FT helper waits at the west end of the eastward siding to pick up the swing brakeman from the caboose when it stops. He will ride the helper up and cut it in at a point determined by the conductor, then remain on the helper to cut it out at Easton.