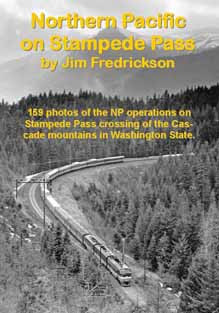 Northern Pacific on Stampede Pass by Jim Fredrickson - After the NP mainline service reached Puget Sound in Washington State via Portland, Oregon, in 1883, the railroad built a line over the Cascade Mountains to shorten the distance and to gain the last part of their land grant awarded by Congress in 1864. The NP choose to build the line south of Snoqualmie Pass over Stampede Pass, which required a 2-mile tunnel, 2.2% ascending and descending grades and presented many difficult operating obstacles for the rest of the NP's years. Jim takes you on a photo tour of the line from helper terminals Easton to Lester, at each end of the steep grades during in the 1940 to 1960 period.
Jim Fredrickson started his railroad career with the Northern Pacific as a call boy in 1943 while still in high school. He learned Morse Code during this first job enough to be become a relief station operator six months later. From operator, Jim became a train dispatcher at Tacoma Union Station, then night chief dispatcher, and finally a transportation assistant in Seattle dealing with car availability after the Burlington Northern merger in early 1970. Jim spent thirty-nine years working on the Tacoma Division for both railroads and retired in 1981.
Jim mastered the art of railroad photography early on. His legendary photos, like engine NP2260 with train No. 3 entering Stampede tunnel taken in 1944 at Martin, Wash., on a bright sunny morning day while after working the third-trick, is one of the great shots of his collection. Jim's images have been published in many railroad-related books and magazines. He continues to make his images available to the NPRHA for publication in the Mainstreeter and in our annual calendar.
Recorded in studio conditions and includes a booklet detailing the captions of each image, plus a bonus trip over the Pass on the first NP F-9 diesel to come to the west end. 172 images in 102 -minute DVD format.