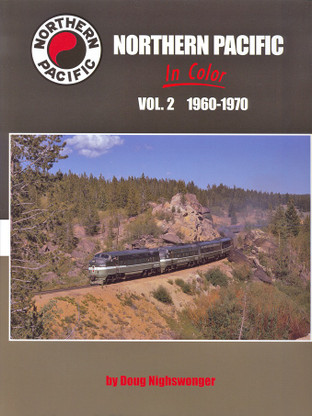 Northern Pacific in Color, Vol. 2 1960-1970: Doug Nighswonger has completed his second book in his "In Color" series as a look at the final decade of the NP before the BN merger. The book focuses on motive power, though a great many shots feature the surrounding environment, stations and enough of the train to get a sense of its makeup. Photos are arranged sequentially from west to east along the entire length of the line from Tacoma to St. Paul, with additional coverage of Portland, Oregon. Coverage is heaviest on the west end. The large color format, usually shows two photos per page with the occasional 2-page spread of a single shot, and some informative text presented as captions. 128 pages, 8.75" x 11.25", hard cover with paper dust jacket.