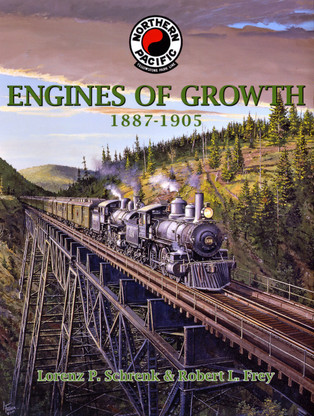 Northern Pacific Railroad Engines of Growth: 1887-1905 completes a series of five books by the same authors documenting the history of the Northern Pacific Railroad and its locomotives. This new volume focuses on the railroad's dramatic and turbulent period from 1887 through 1905. This period saw the rapid development of railroad technology. This included heavier and more powerful locomotives, better track, the adoption of airbrake systems, and the introduction of much-improved couplers. Trains grew longer and traffic loads increased. During this period the NP was a leader in experimenting with compound locomotives in which steam was recycled to save on fuel costs.

This volume tells how the Northern Pacific came back from near financial disaster in the mid-1880s only to enter a period of excessive growth that ended in financial collapse. Human error and greed played significant roles in the process. So did competition with archrival Union Pacific Railroad. When the Silver Panic of 1893 threw the nation into a severe depression, the Northern Pacific, along with many other railroads, suffered financial failure. St. Paul's James J. Hill, an astute railroad leader backed by J.P. Morgan, gained control of the NP and its huge land grant. Hill visualized an integrated rail system across the Northwest and laid the groundwork for its creation. Hard cover, 256 pages with over 200 photos and illustrations.