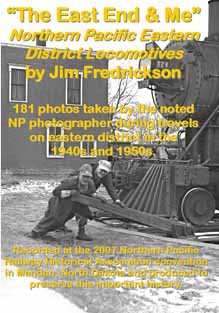 "The East End & Me" Northern Pacific Eastern District Locomotives: Jim Fredrickson first recognized the majesty of big NP steam locomotives on a trip to the east in 1940 when he took his first photos of an NP Z-6 and an A3. When he returned home to Tacoma, Washington, he was disappointed to learn that none of these marvelous machines came to western Washington due the size restrictions of the Stampede Tunnel in the Cascade Mountains.
Jim photographed trains around Tacoma and became such a fixture at the Tacoma Union Depot, that the NP offered him a job as "Call-Boy" in 1943, while he was still attending Stadium High School in Tacoma. While performing this job, Jim learned Morse Code and was offered a job as a station telegrapher when he graduated for high school.
Soon after going to work for the NP, Jim was giving a pass needed to ride company trains to the station at which he worked. On his vacation times, he also was able to travel to the eastern stations on the NP where the big steam powered the trains. This led to a number of trips during the 1940s and 1950s to photography locomotives and those photos form the basis of this presentation at the Northern Pacific Railway Historical Association convention in Mandan, North Dakota. Jim's photo collection now totals more than 35,000 negatives of train operations throughout the United States and Canada.
This DVD program is 71 minutes and includes 181 images arranged and narrated by Jim Fredrickson. A booklet containing full captions for all images is included with this DVD.