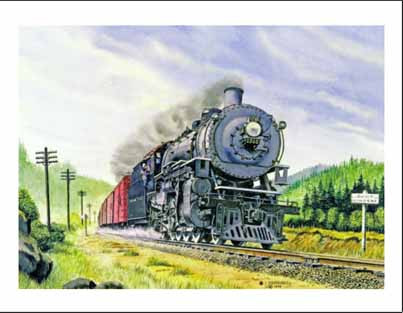 NP 1745 on Getchell Hill WA Note Card - The NPRHA reproduced some of Jack Christensen's great watercolor paintings of operating NP steam locomotives as greeting cards. Each card is commercially printed in full color, comes with a 5.7" x 4.4" envelope and has the caption shown below on the back. Each package contains twelve copies of the card shown above and twelve envelopes.

In the early 1940's, NP 1745 with train 675 roars down Getchell hill with engineer J.W. "Wimpy" McBride at the throttle. The fireman has shaken down the fire and flooded the ashpan. As they pass over the dump area, he opens the ashpan levers and both men lean out, looking for signs of a clean washout of the ash. In a few minutes they will take water at Edgecomb and then proceed a few miles to Arlington, the halfway point between Auburn and Sumas, Washington.