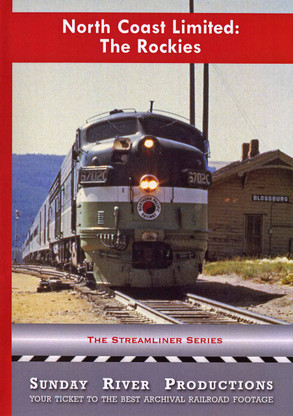 Ride and view trackside the NP's premier train, North Coast Limited (NCL) and its secondary train, The Mainstreeter, over the 400 miles between Bozeman, Montana and Pasco, Washington, during the late 1960s and early 1970s. The trains climb and descend the 2.2% grades of Homestake Pass, Evaro Hill and Mullan Pass. The program also includes vignettes of steam-powered at Cabinet Gorge now drowned behind the dam and some excerpts from NPRHA's Jim Fredrickson showing steam on Evero Hill and the Timken engine leaving a station. Alva Morrison had the foresight to shot this footage in pristine color Ektachrome when it was apparent that the train's days were numbered. 38 minutes