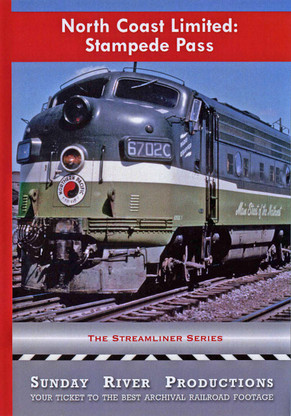 When it came to the grandeur of the West, few U.S. transcontinental railroads could challenge the Northern Pacific. Snaking along the oxbow loops at the bottom of Yakima Canyon, the Loewy green North Coast Limited (NCL) was a startling vision against the chocolate browns of the lava flows. The eastbound NCL began at the tidewater in Seattle, wrestling up through the majestic forests to Stampede Pass tunnel, and down the desert canyons to Pasco. The NPRHA provided diagrams, maps and photos to illustrate the 5% switchback line that preceded the completion of the tunnel which topped the Cascade Mountains. The Portland Connection the NCL is briefly shown. Alva Morrison shot the NCL in pristine color Ektachrome in the 1960s when it was apparent that the train's days were numbered. The DVD closes with a 6-minute clip from the NPRHA's Reopening of Stampede Pass video narrated by Jack Christensen who was the engineer on the first scheduled train through the tunnel in thirteen years. 47 minutes