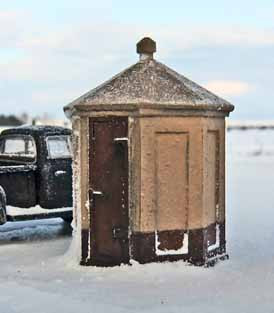 N-Scale Scale Ð Signal Maintainers Oil House: Signal Maintainers Oil Houses were common alongside the Northern Pacific right-of-way, used to store oil for signal and switch lamps and other purposes circa 1910. This octagon structure is based on an NP standard plan. As originally built, they appear to have been painted Indian red, in later years they received the sand and brown paint scheme usually with the metal access door all brown, and like other structures during the mid to late 1960s to 1970 the NP repainted some to all sand.

A package contains three N-scale sheds, each a clean unitary resin casting, with no assembly required.