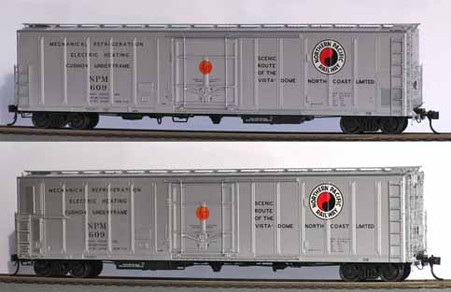 To Order: Select the Car Number you want from the dropdown list, select the quantity from the Quantity pull down menu and click the Add to Cart button. Repeat this process for each car number you order. Note: that NPRHA members can register to receive an 8% discount on all items purchased from the Company Store.

NP 57-Foot Mechanical Refrigerator Cars: Do you need to ship a load of blueberries from Washington to the east coast? Perhaps your railroad needs to move a load of Northwest apples or pears to Florida or maybe a load of Washington or Idaho potatoes to Boston, New York City or Texas? The NPRHA can help you!!

In 1964, Pacific Car & Foundry delivered to the Northern Pacific, a set of 57-foot mechanical reefers from PC&F's R-70-14 design. These cars provided additional capacity for frozen foods and perishable commodities and were assigned to the NP_Ñés series NPM 551-625. They had Equipco loaders and a larger 9-foot door to speed loading and were suitable for many loads that could not be handled by the smaller mechanical reefer fleet. A larger order for similar cars with minor differences was delivered in 1965 and received NP numbers NPM 631-725.

Premier model manufacturer, Red Caboose, awarded the NPRHA exclusive marketing rights to these two series of NP mechanical reefer model cars they just released in HO-scale. These cars are all ready-to-run with metal wheelsets and knuckle couplers.They correspond to their prototype's "as-built" configurations with roofwalks, tall ladders, high brakes, correct Hydracushion underframes, silver car bodies and black underbodies and lettering. The models have the highly accurate detailing that you expect from Red Caboose and the NPRHA. We ordered the two seriesof cars configured with a total of twelve different NP road numbers:
Series NPM 551-620 is represented by car numbers 555, 579, 584, 598, 609, 614.
Series NPM 631-725 is represented by car numbers 637, 645, 648, 659, 663, 672.