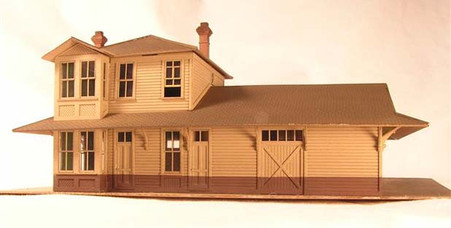 NP 2-Story Standard Plan Depot, Class C or 3rd Class: When the NP was constructed many passing sidings were remote or nearby towns were very small, so the railroad provided quarters for operators and station agents. In 1889-90, J. W. McKendrick, the NP_ÌÎÌ_ÌÎ_ÌÎÌ_ÌÎÌÕÌÎÌ_ÌÎ_ÌÎå«Ì´å©s Chief Engineer, issued an extensive set of standard plans which included a two-story depot with living quarters upstairs. Depot plans were divided into classes designated by number or letter. Depots designated 1st, 2nd, 3rd or 4th Class were constructed with an elevated freight platform because the house track behind the depot was built at approximately the same elevation as the main line. Class A, B, C, and D depots were built with the house track lowered approximately 3.5 feet so that the freight platform was on the same level as the passenger platform. The Classes 1 and A were built at the largest towns, while Classes 4 and C were built where the local service was slight.

The NPRHA Modeling Committee has produced a laser-cut wood kit which can be completed as either a 3rd Class or a Class C depot. These depots were built at many stations from North Dakota to the shores of the Pacific with many surviving into the merger era. These kits come with all required wood parts, cast resin chimneys and assembly instructions and exploded drawings on a CD.