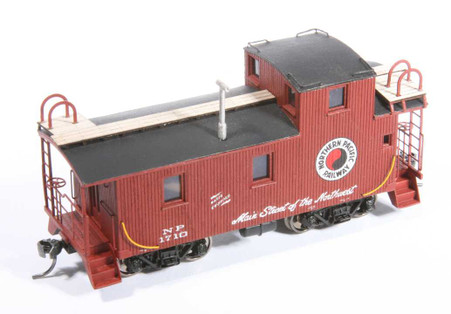 This kit reflects the se postwar 1700 series cabooses, particularly those that have their rear side windows forward of the front of the cupola by the width of the window (the 1200 series and a few 1700 series cars had their second side windows directly in line with the front of the cupola, which can be modeled with our kit No. 871). Our new kit features 100% laser-cut components with custom laser-scribed plywood side and end walls; Tab & Slot and Peel & Stick construction; laser-cut underframe, end platforms, end railing, and brake wheels; cast resin platform steps and brake gear; white metal smokejack; fully illustrated instructions that provide information on painting and decaling the assembled model; and several fixtures to aid the modeler in creating all the handholds, railing, and ladders appropriate for the prototype. In addition, the HO scale kit can be built in one of three different ways based on the specific prototype the modeler wishes to reproduce: with full length letter boards across the top of the car sides; with battens only below the roof overhang on the sides; or with battens plus sheet metal flashing below the roof overhang. Also, two different widths of end ladders are also provided, so the modeler can match their particular caboose even more accurately. We recommend the purchase of WalthersProto 920-2032 Andrews Caboose Trucks; Kadee No. 5 couplers with draft gear boxes; Microscale decal sheet No. 87-184 “Northern Pacific Cabooses Pre-Merger, Early” or No. 87-842 “Burlington Northern Cabooses”; and the paint and glue of your choice for the completion of this kit.