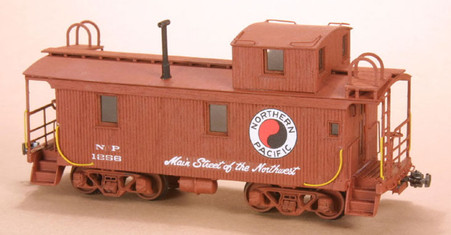 The NP's 1200 series of 24' cabooses were built as early as 1907, yet they lasted for many years. First rebuilt in the 1920s with steel center sills, they were renumbered in 1942 into the 1200 series, with some 145 in service then. During the late 1940s and early 1950s, these cars were rebuilt yet again to more modern safety standards, and our kit represents this post-War appearance. With their distinctive large cupolas, and fabricated end railings, these cars were a common sight all along the NP up until the BN era. Our kit includes all the end railings and ladders, two brake wheels, cast resin platform steps, and a jig for bending your own grab irons; as well as both widths of ladder landings on the roof. (less trucks, decals, and couplers).