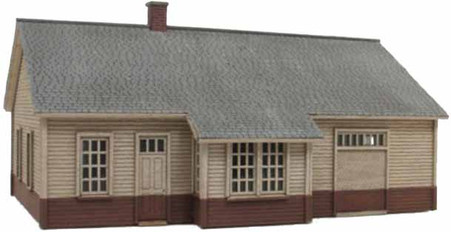 HO Scale 30x48 NP Standard Plan Depot: In the early 1900's, the NP developed a plan for an economical, standard plan depot. It was installed at many locations in Montana and Washington by the 1920s, but this depot was found at several locations across the whole NP system -- sometimes as replacements for burned depots. While "basic" in its trappings, NPRHA depot authority Chuck Soule states "this depot just screams NP!" Plans for the depot can be found in Mainstreeter ÌÎÌ_ÌÎ_ÌÎÌ_ÌÎÌÕÌÎÌ_ÌÎ_ÌÎå«Ì´å Vol. 21, No 2 (Spring 2002), and the depot still stands in some locations, like Avon Montana. This HO laser-cut wood kit features interior details, Tichy windows and doors, roof material, and super simple instructions. It was designed from the NP Standard Plan by member Bruce Barney. A great beginner kit!