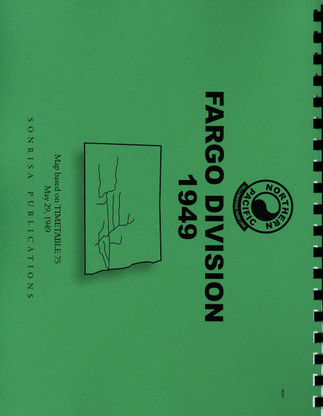 Northern Pacific Fargo Division Maps of 1949: This soft cover book represents a snapshot of the NP's Fargo Division in North Dakota in 1949 during an era of transition. The image above shows Fargo Division's first subdivision from Tower City ND to Dilworth MN with all the other railroads and NP Branches in the area. The size of each siding is indicated in the small box car images by each station.
The mid-twentieth century saw the continued increase of modern technology in every area of life and industry. Progress demanded change and the railroads experienced this as the maintenance-intensive steam locomotive gave way to the economies and tractive effort of the diesel-electric locomotive. The telegraph met its demise as telephones were installed at an increasing number of stations.
Rail lines, stations, and facilities shown in this book are based on Timetable 75 of May 29, 1949. Maps and grade profiles are based on USGS topographic maps in conjunction with data from the Timetable. Additional information was supplied by the Consolidated Code of Operating Rules.Many thanks are due the members of the Northern Pacific Railway Historical Association whose generosity of knowledge contributed greatly to this work. In particular, I am indebted to Jim Frederickson, NP veteran telegrapher, dispatcher and photographer, who graciously loaned the original Timetable.