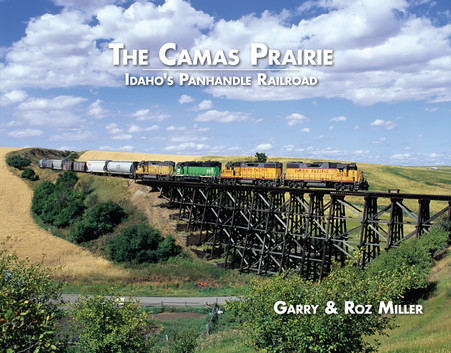 Camas Prairie - Idaho's Panhandle Railroad by Gary and Roz Miller. A history of the spectacular Camas Prairie Railroad in eastern Washington and Northern Idaho. Formed out of the intense competition between the Northern Pacific Railway and the Union Pacific Railroad in 1909, the Camas Prairie operated joint trackage between Riparia, Washington, and Lewiston, Idaho, with branches extending to Headquarters, Stites, and Grangeville, Idaho. The railroad became known for its many spectacular timber bridges, including the famous Halfmoon bridge in Lapwai Canyon.

Carefully researched from railroad papers and interviews with employees, this is the story of the Camas Prairie Railroad from founding to present-day. Chapters cover surveying and constructing the line to the railroad’s namesake prairie; the relationship with the railroad’s largest shipper, Potlatch Forests, Inc.; the evolving operations of each of the railroad’s four subdivisions as the company adapted to stay viable; the railroad’s equipment, including locomotives, cabooses, and other rolling stock leased from its parent companies Union Pacific and Northern Pacific; and the post-1998 short line era. The book also discusses freight and passenger connections to the parent roads.

From the beginning, photographers were drawn to the railroad due to the many spectacular bridges built to handle the steep terrain. Photographs in the book span from the early construction era to the 2000s, and includes the work of many well-known photographers.