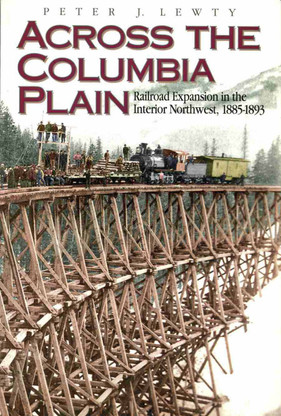 Across the Columbia Plain

Across the Columbia Plain Railroad Expansion in the Interior Northwest, 1885-1893: In just a few years of prosperity, between 1886 and 1891, a wave of railroad construction broke across the sparsely populated inland plain of the Pacific Northwest. Racing to secure strategic routes and sources of traffic, the railway promoters built an extensive and bewildering network of competing lines. Continuing the saga he commenced in To the Columbia Gateway: The Oregon Railway and the Northern Pacific, 1879-1884 (WSU Press 1987), author Peter J. Lewty describes the relationships between rival railroad companies and traces the expansion of the Northern Pacific and Union Pacific railway systems in the interior Northwest between 1885 and 1893. Recreating the prevailing atmosphere of optimism and excitement, he chronicles the construction of the Pacific extension of the Great Northern Railway and presents a multifaceted portrait of railway operations on the last frontier of American settlement. Extensively documented and fast moving, Across the Columbia Plain will be required reading for railroad enthusiasts and Northwest historians. Author Peter J. Lewty, a retired mining engineer, received his formal education in England and now lives in British Columbia. Softbound volume with 344, 6"x 9" pages.